Other pages about Ladakh
On this page


Ladakh, also known as the Buddhist Kingdom, is a home to many of the oldest monasteries of Tibetan Buddhism. Because Ladakh lies in the Indian territory, it did not suffer from the Chinese invasion. It can be said that Ladakh hosts as much of the Tibetan culture as Tibet.

The monasteries of Ladakh are a huge part of their culture but are also open to the general public. Interacting with the monks residing in these monasteries can be quite informative and can help you understand the culture better. You can sit in the prayer room and enjoy the unique spiritual atmosphere, and it is truly a one of a kind experience. To access some of the monasteries you may have to pay a modest entry fee.

Himalayan Ecotourism helps in organizing a special tour that takes you closer to the Ladakhi Culture. With us, you will get to spend time with Buddhist teachers, local Shamans and Astrologers.
This is how you can travel with us.

Contact us to know the dates of the annual festivals you would live to witness in these monasteries. We will help you become a part of these vibrant festivals by adjusting your trip dates accordingly.

It is to be considered that some of the most beautiful and well preserved monasteries are not accessible by road. But have faith in us when we say that visiting such monasteries will help you delve deep into your own consciousness.


Map of the monasteries in Ladakh

Ladakh - Map of the monasteries

How to get to Thiksey monastery - Distance from Leh

Thiksey monastery is one of the easiest to reach from Leh. It is 18 km from Leh on the road that goes towards Upshi.

Festival of Ladakh are organized according to the Tibetan calendar. Hence, there are no fixed dates for the Thiksey festival, but it usually happens in the month of November.

You have several option for a stay near the monastery. There is the Thiksey monastery guesthouse which is reasonably comfortable, a nearby hotel and even a luxury camp. Staying at one of these places allows you to enjoy the atmosphere of the Thiksey without having to worry about getting back to your hotel in Leh.


Thiksey Monastery or Thiksey Gompa is a beautiful monastery that overlooks the fertile valley of Ladakh and the Indus River.
The monastery is known for its beautiful 3 stories tall gilded statue of Maitreya - the Future Buddha.

The interior of the monastery is decked up with beautiful art and masterpieces. The monastery consists of a huge complex with several temples and places of religious and cultural significance.

The courtyard of the Thiksey Monastery is beautifully decorated with traditional Ladakhi architecture. But the best part is, the monastery is built against a backdrop of snow covered mountains, which is a sight to be witnessed with one’s own eyes!

Thiksey Monastery is conveniently located 45mins from Leh - the capital of Ladakh and is a must-visit for anyone who is a guest in the land of Ladakh.
Thiksey monastery is part of a huge complex with several temples and places of religious and cultural significance. 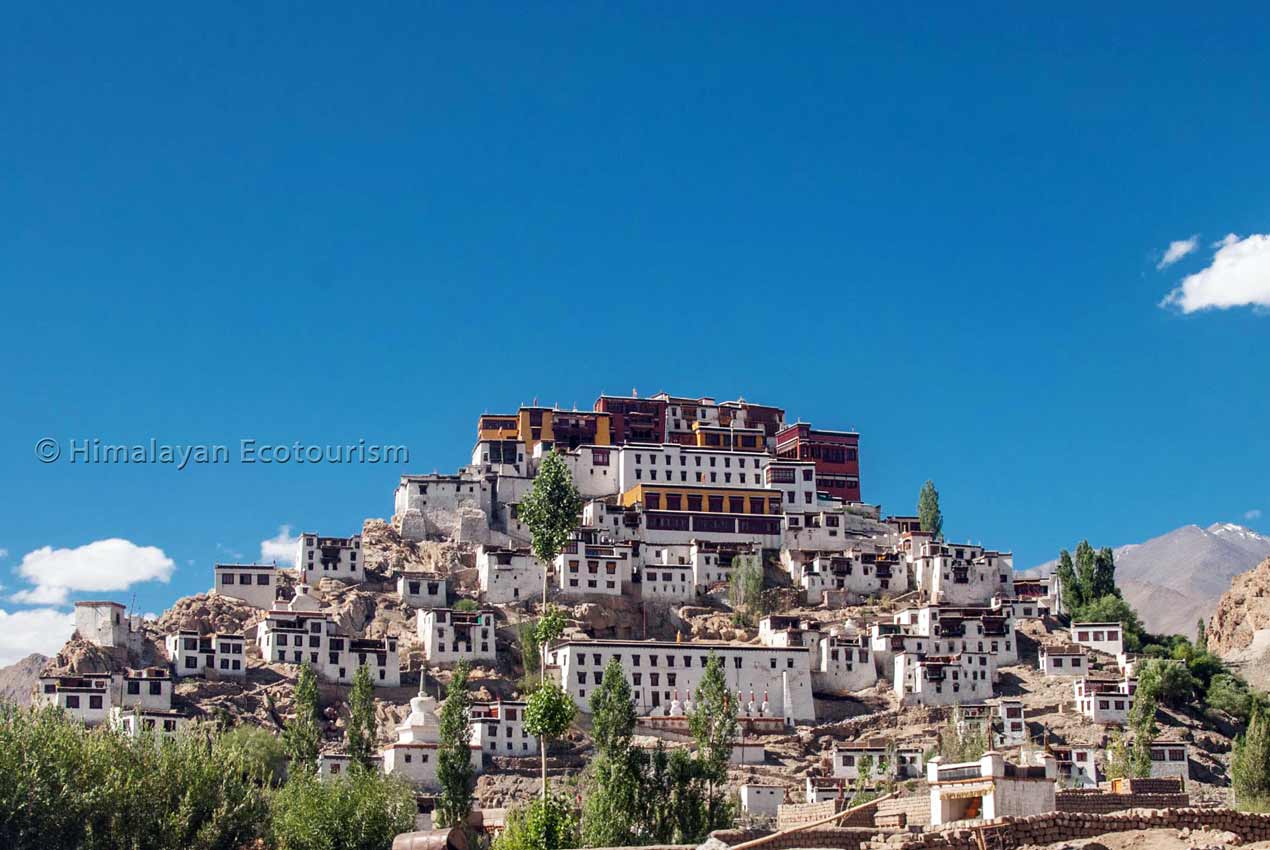 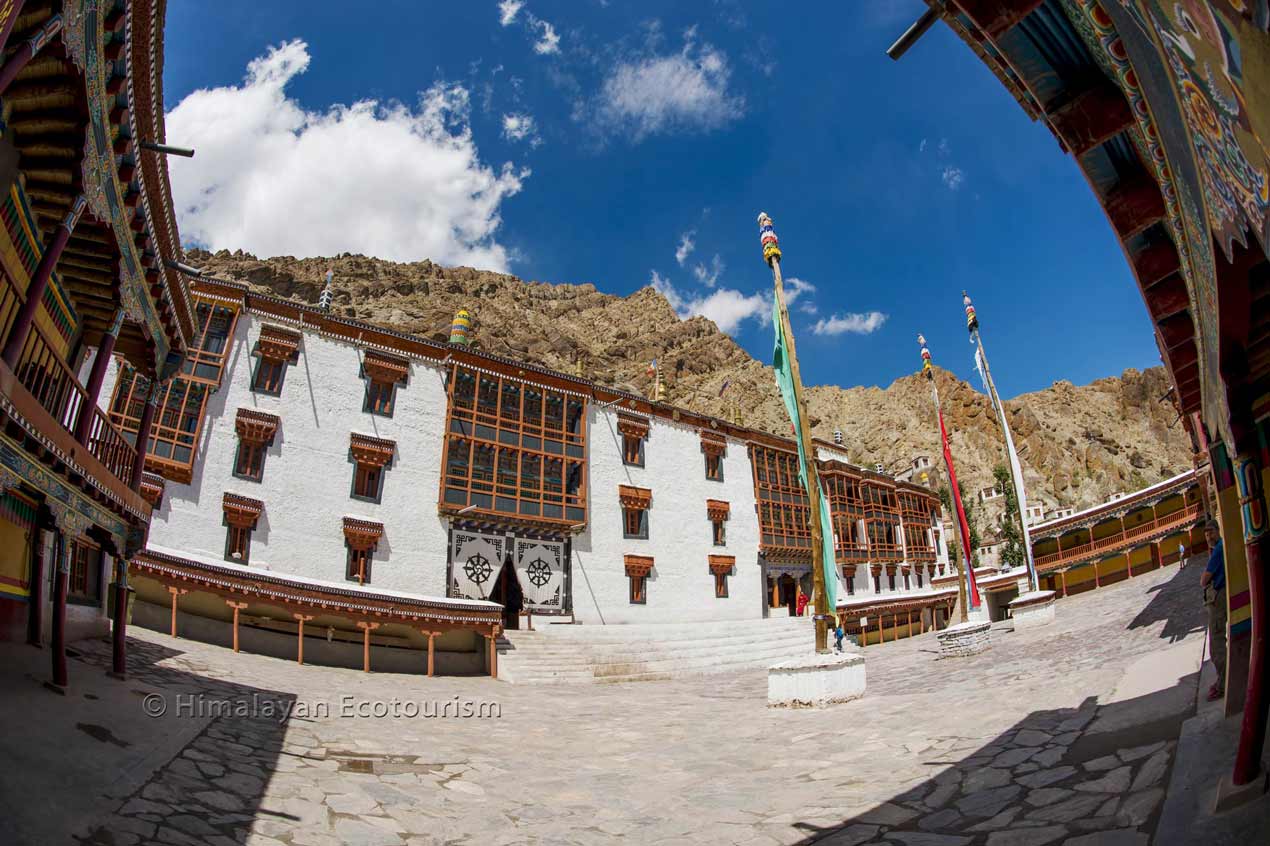 Secluded in steep gorge Hemis offers its visitors the experience of a unique atmosphere.

How to get to Hemis monastery - Distance from Leh

Hemis monastery is East of the capital Leh. You will have to drive 40 km from Leh on the road that goes towards Upshi. It takes one to one and half hour to reach.

Festival of Ladakh are organized according to the Tibetan calendar. Hence, there are no fixed dates for the Hemis festival but it usually happens in the month of July.

If you want to stay at the Hemis monastery (a good idea), it has a guesthouse. Although it is great to stay at the monastery, you need to compromise of the comfort of the stay ! Rooms are very basic, and the bathroom is common and not in good conditions.


Hemis Monastery, considered to be the largest and most popular monastery in Ladakh, is famous for its annual Hemis festival celebration which is hosted in the month of July.

This is the best time to see Hemis monastery in all its glory as you will witness masked dancers traditionally dressed from head to toe representing demons and deities, telling everyone an untold story.

Another jaw dropping moment takes place in this monastery is that every 12 years, the 3 storeys high Thangka (A Sacred Tapestry) of Guru Padmasambhava is displayed.

Hemis monastery is considered to be a rich treasure house of the cultural riches of Ladakh. Within the premises of the monastery, is Hemis museum which houses beautiful cultural artifacts from the past. That’s not it, there are various Buddhist temples within the monastery that hold daily prayers hosted by the monks.

You will witness several gilded statues of various deities and come across several resident monks who work to preserve the Ladakhi Buddhist culture.

How to get to Likir monastery - Distance from Leh

The Likir monastery is 52 km from Leh and it takes around one and half hour to reach by taxi. It is to the West of Leh.

Festival of Ladakh are held according to the Tibetan calendar. Hence, there are no fixed dates for the Likir festival but it usually happens in the month of February.

A guesthouse is available near the monastery.


Approximately 52 kms to the west of Leh city, Likir Monastery is another traditional Buddhist Monastery which is one of the most ancient and well-maintained mostaries of all.
The head lama of Likir possesses a throne and is seated at the old assembly hall. With two assembly halls and ample historical stories about the Kings that once ruled Ladakh, you will surely be teleported to the past. Besides its impressive history, Likir monastery is popular for its 75-feet tall Buddha statue.
Likir village, home of this beautiful monastery, is one of the oldest villages of India. 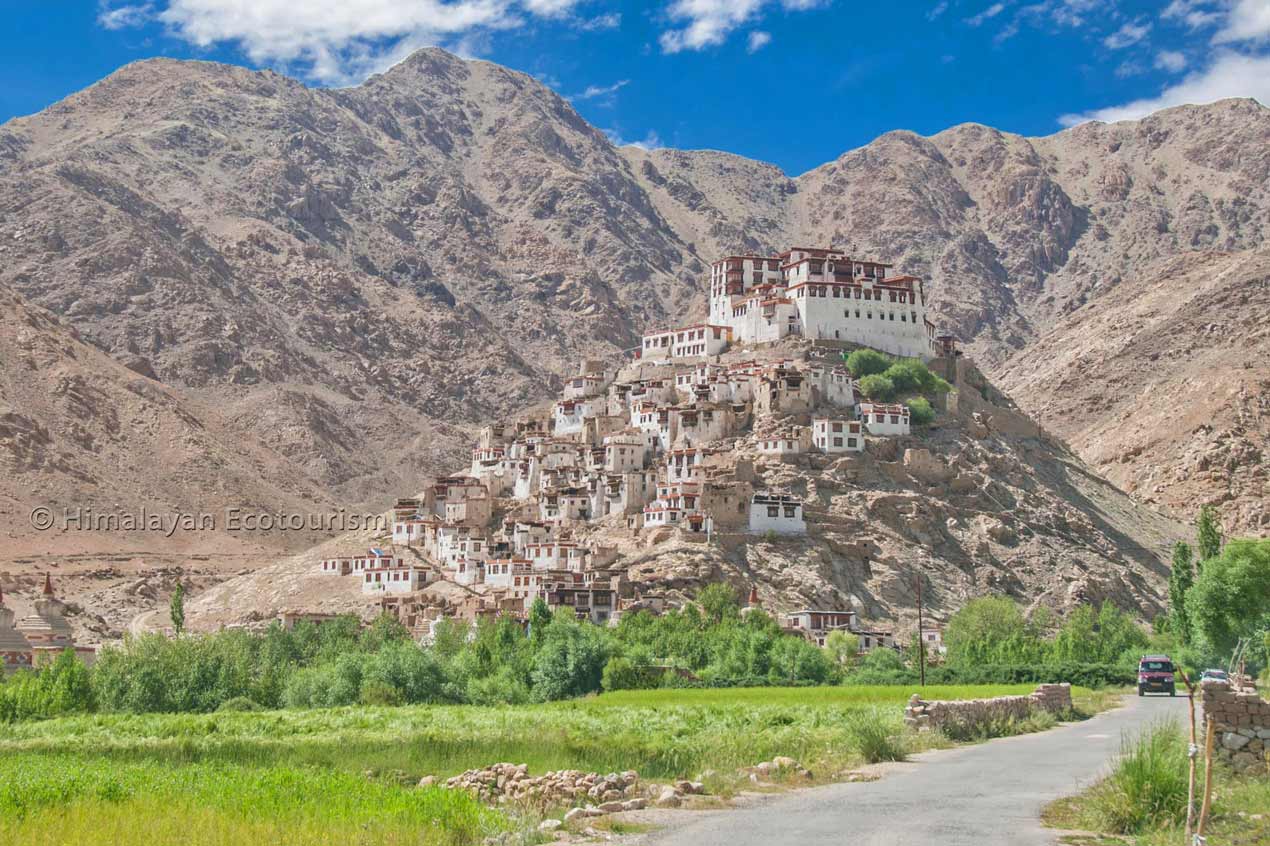 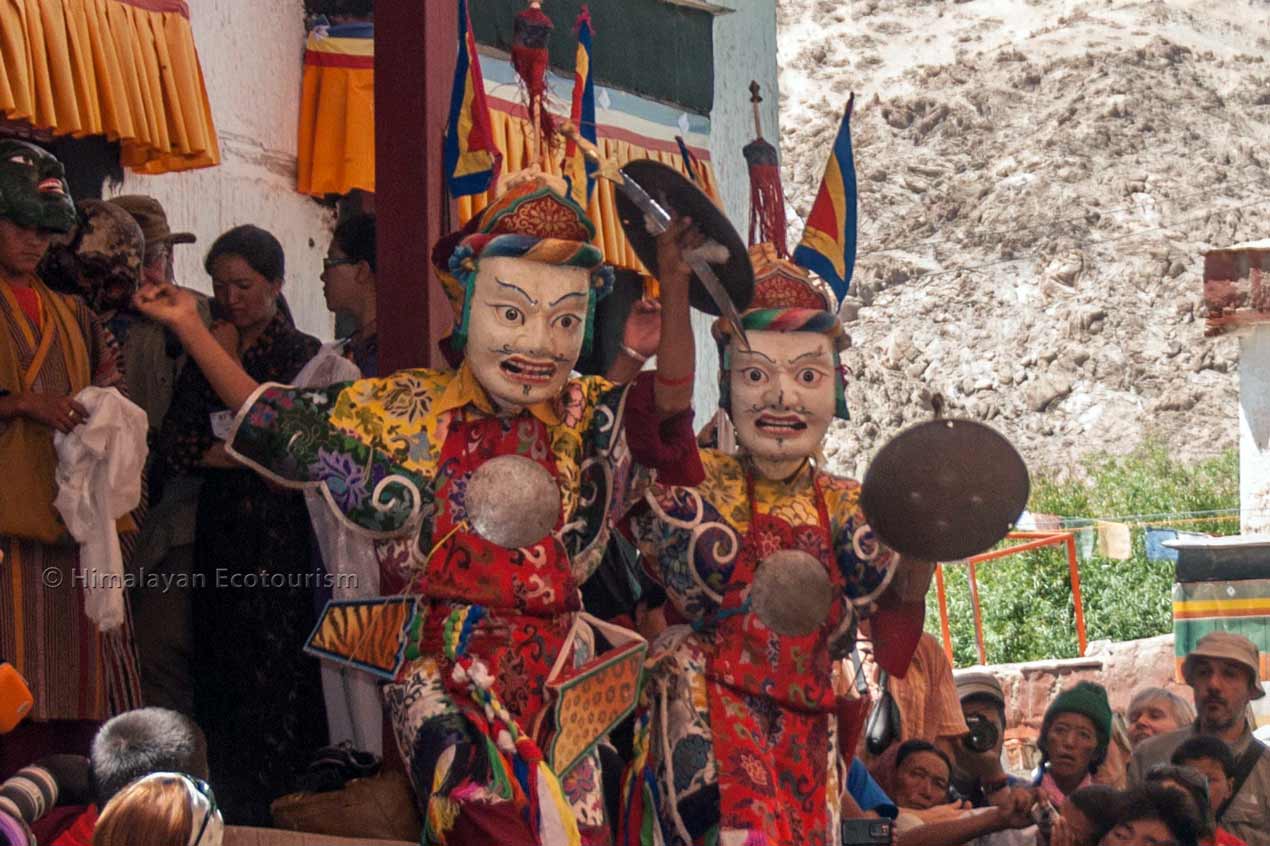 Monks dancing in costume at the Takthok monastery festival.

How to get to Takthok monastery - Distance from Leh

Takthok monastery is East of the capital Leh. You will have to drive 48 km from Leh on the road that goes towards the Changla pass (on the way to Pangong lake). It takes one to one and half hour to reach.

Festival of Ladakh are organized according to the Tibetan calendar. Hence, there are no fixed dates for the Takthok festival but it usually happens early August.

There is no stay possible in the monastery itself, but a few homestays and guesthouses are available at the next village called Shakti.


This rock-made monastery, located around 46kms from Leh city, was the inspiration behind its name which literally translates to ‘Rock Roof’.
The monastery is located inside a cave, and was founded in the 16th century. Travellers can explore many things here including the caves and the 108 volumes of the Buddhist teachings that the library holds.
The monastery has a great view for the visitors to enjoy and is definitely a unique monastery to visit.
Himalayan Ecotourism takes you on a tour customized especially for you, that will take you to some of the most enchanting monasteries of Ladakh, Takthok being one of the most prominent of the lot.

How to get to Lamayuru monastery - Distance from Leh

There are no fixed dates for the festival but it usually happens in June or July.

The Lamayuru monastery is located right in the village of Lamayuru. Therefore you have several options like homestays or guesthouses for your stay.


Lamayuru monastery, located at a distance of 125kms from the city of Leh, is popular for its lunar landscape, which is to say that the landscape around the monastery resembles the land that of the moon.
Travellers may also call the location of the monastery a moonscape. The monastery’s odd geological formation is not the only thing that makes it so unique.
The monastery houses a Glass Meditation Cave for the residing monks and will leave you in absolute awe of its majesticity. The annual festival held here, known as the Yuru Kabyat is the most awaited amongst the Ladakhis and travellers. 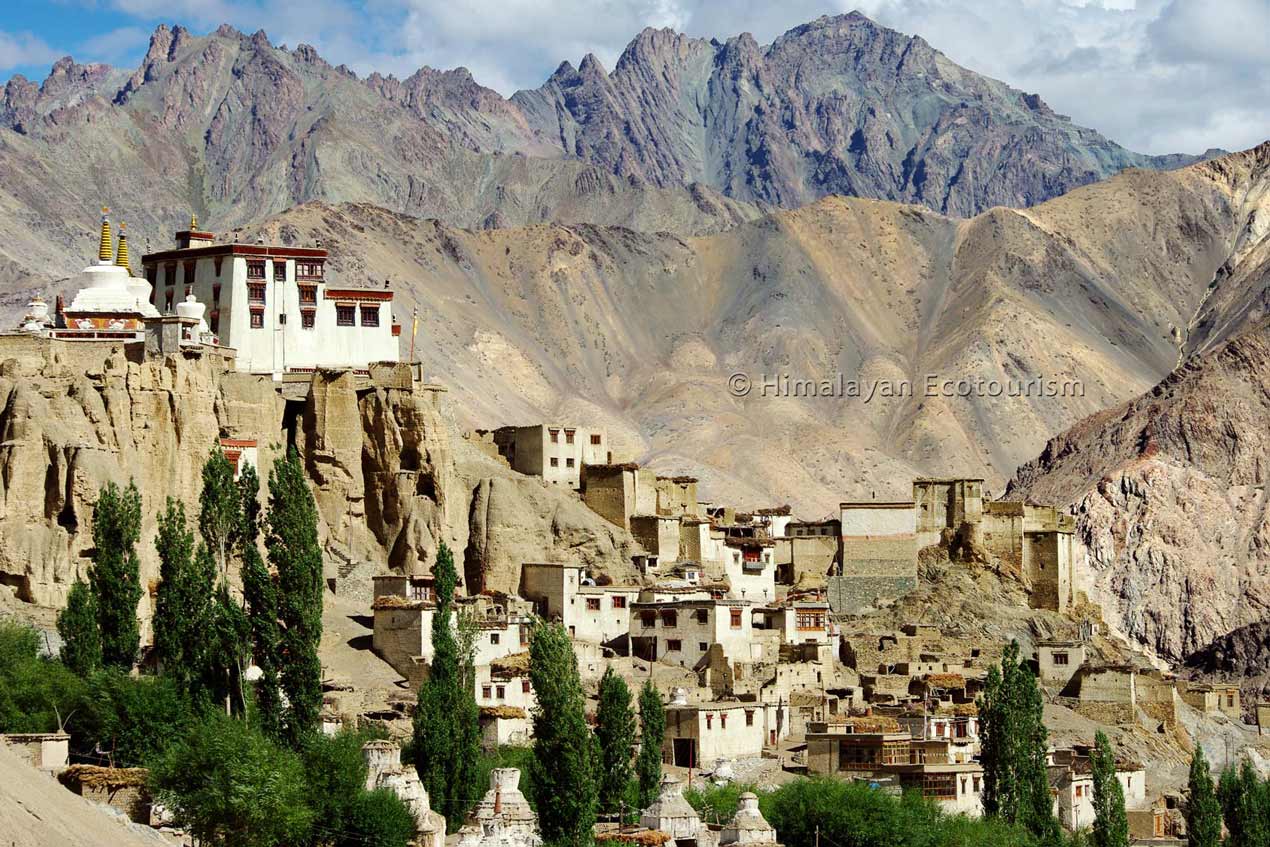 Other monasteries in Ladakh

Located on the banks of the Indus River, Alchi Monastery is a monastic jewel of Ladakh.
It lies about 65 kms from Leh city and dates back to about 1000 years which explains the visible influence of the Tibetan culture in the lives of the locals around.
The monastery has five shrines and splendid wall paintings with thousands of miniature sized paintings of Buddha.

About 25kms from the city of Leh, Stakna Monastery, rather underrated, is a must-visit for all those planning to explore the variety of monastery Ladakh has to offer.
It was founded by a Bhutanese scholar in the 16th century and it literally translates as ‘Tiger’s Nose’.
It is also the only Bhutanese monastery in Ladakh.

The Phyang Monastery is located just 15-16kms from the city of Leh and was founded by the King Tashi Namgyal.
The monastery is home to numerous sacred shrines and a 900 year old museum that preserves an extensive collection of idols including a number of fine Kashmiri bronzes probably dating to the 14th century, thangkas, Chinese, Tibetan and Mongolian firearms and weapons.

The Spituk monastery is probably the closest one from the city of Leh, located only around 6 kms away.
The monastery has a lot of historical value just like many other monasteries.
Home to about a 100 monks, Spituk monastery also contains a giant statue of Kali which is unveiled during the annual Gustor festival.

Founded in the 14th century, Diskit Monastery is the administrative centre of Nubra Valley and is considered to be the largest and oldest monastery in the whole of Nubra Valley.
The most prominent attraction of this monastery is its huge Maitreya Buddha statue and was inaugurated by His Holiness Dalai Lama.
Travellers can enjoy a breath-taking panoramic view from the bottom of the statue and is definitely a sight worth visiting.

Himalayan Ecotourism is the Overall Winner of the Indian Responsible Tourism Award 2019. We are also the Gold winner in the Best Adventure Operator category.
On the international scene, we have been declared winner of the Sustainable Tourism Award 2019 by Skal International and Biosphere.
Our cooperative-based model of social enterprise and our efforts to protect the Himalayas are the main reasons for winning these awards.
Thank you to all our cooperative members, our customers, our friends and well-wishers !