Marahni trek in the GHNP

Marahni Trek is suitable when you only have a few days for visiting the GHNP and you expect to have a great experience of the place. Marahni trek starts at an altitude of 2100 m, much higher than Gushaini, the starting point of Rolla and all other Tirthan valley treks. Hence the total ascent is comparatively less although you reach a maximum altitude of 3670 m at Marahni.

The first day of the Marahni trek is Rangthar which let’s you discover some beautiful Himalayan villages. Then you gradually get in the wilderness of the GHNP going through an oak forest which will give you the feeling of being in a fairy tale.

Kundri meadow is located on the way to Marahni. It is a great camping place and it can be used as base camp for further exploration towards Marahni. Marahni in itself could be a camp site in case the weather permits. The view from the top of Marahni is amazing. Some mammals can be observed on this trek as well, mostly wild sheeps (Goral) and Black Bears (or even the Brow bear).

Feeling too tired on the way to Marahni? no problem, stop at Kundri which is already a very nice destination!
There is a lot of flexibility on this trek.

Duration of your trek

Day-min : The minimum number of days required for the trek
Day-max : The maximum number of days you can spend on this trek. Prolonged itinerary can be discussed with our team.
AWTD : Average walking time per day (<3 : easy, 3 to 5 : moderate, >5 : strenuous)

Altitudes of your trek

Difficulty of your trek

Stamina : The physical effort involved during your trek. Rated from 0 (easiest) to 100 (most strenuous). If you have an average fitness you can consider all the treks up to 50. See here for more details
Technical : Difficulty of your trek in terms of exposure to danger and required experience.
0 to 20 : No difficulties,
20 to 40 : Walking on good mountain trails,
40 to 60 : Some walking on difficult mountain trails (steep slopes, rocks, etc.),
60 to 80: You are exposed to some dangers (void, snow, falling rocks, etc.),
80 to 100 : Experience required (please inquire).
Overall : Average between Stamina and Technical rating. 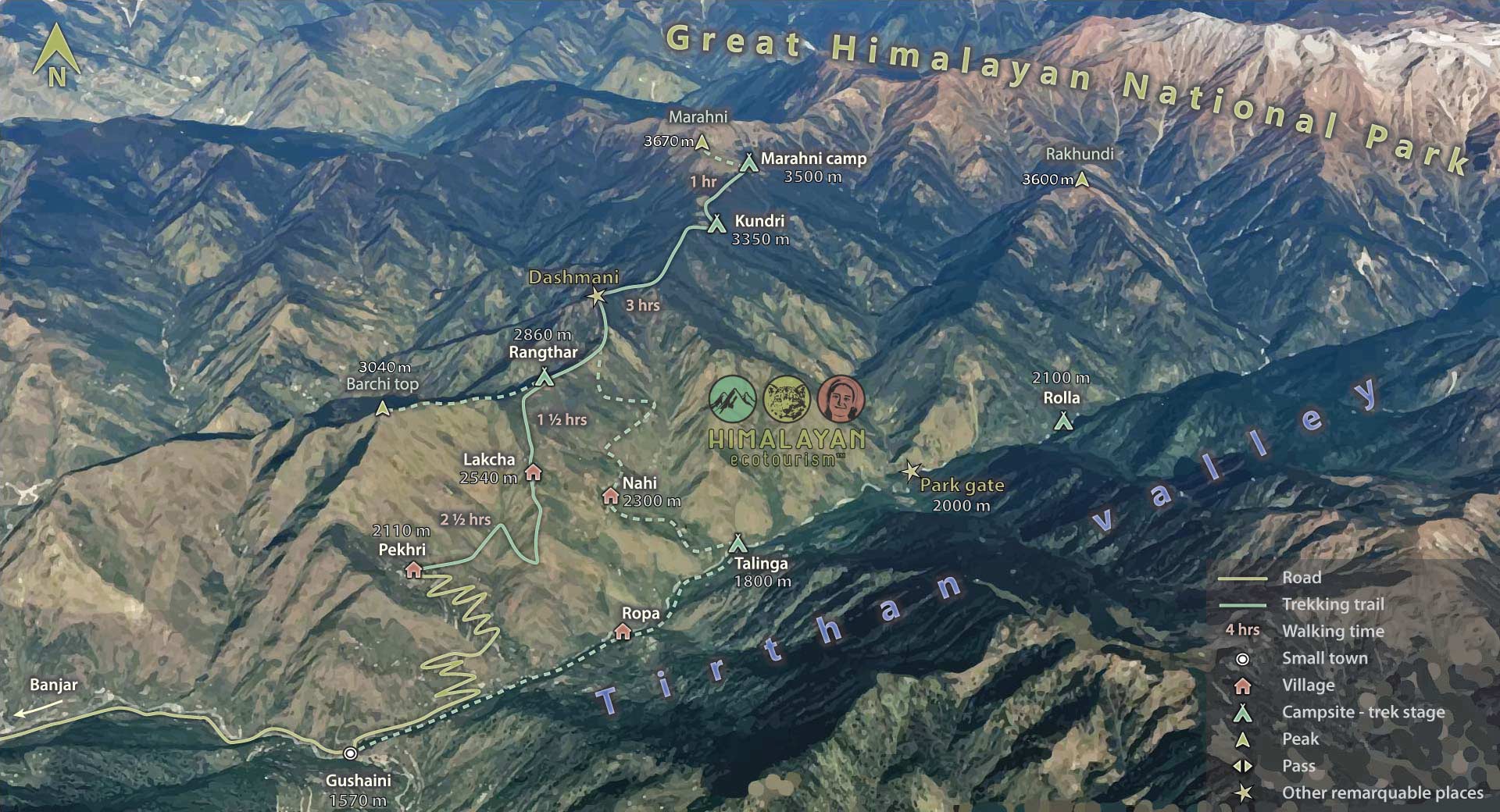 On the western side of the Tirthan valley. From Day 2 the trek follows a mountain ridge with great view of both sides: Tirthan and Srikot. You need to go to the trek starting point by jeep with your staff and equipment (9 km, 30 minutes).

Marahni trek starts at a relatively higher altitude, and so you can enjoy a very scenic peak without having to climb too much.

Best time to trek to Marahni

Best time for Marahni trek is April, May, June, and then October and November.

You may also consider July, September and December.


More photos of the Marahni trek 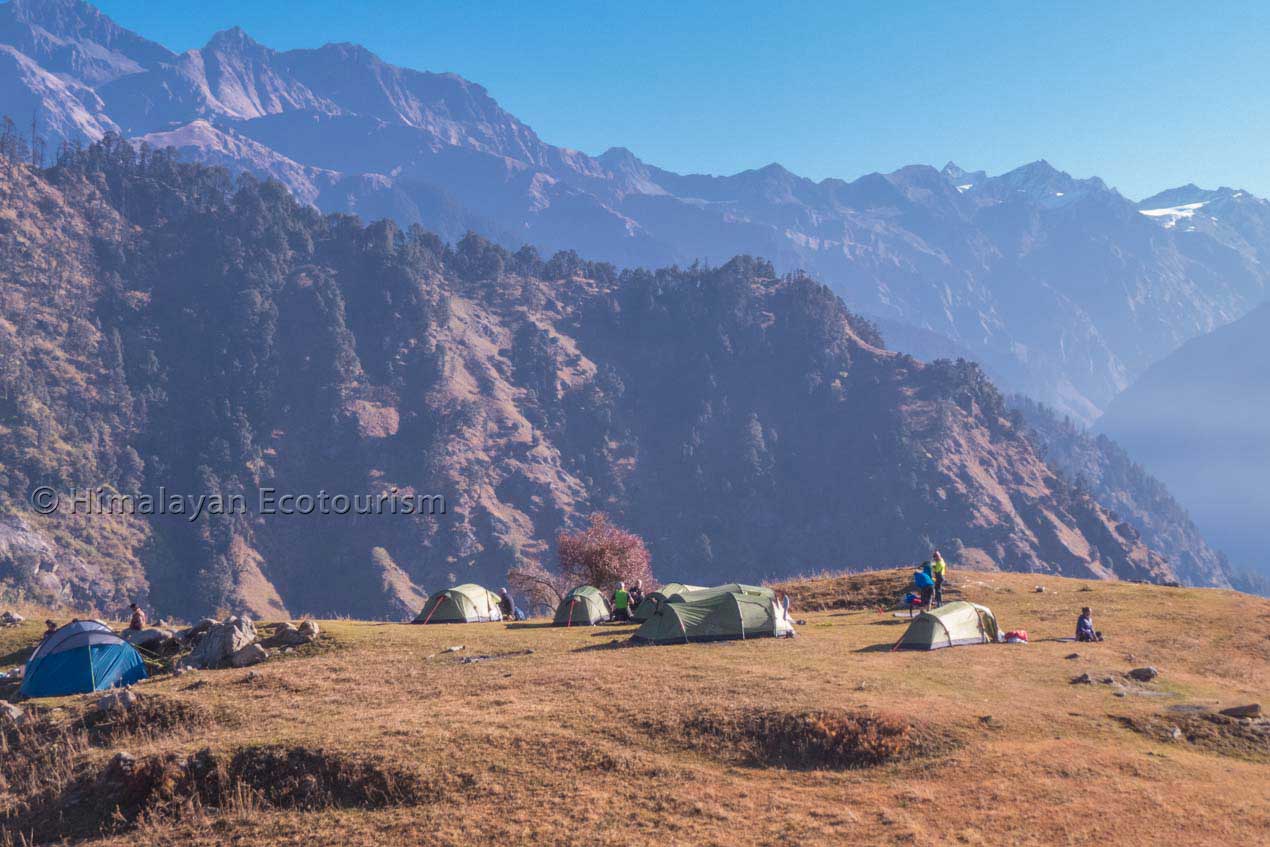 The first night is spent at the Rangthar meadow.

On this day you will gradually approach the real wild of the Great Himalayan National Park. 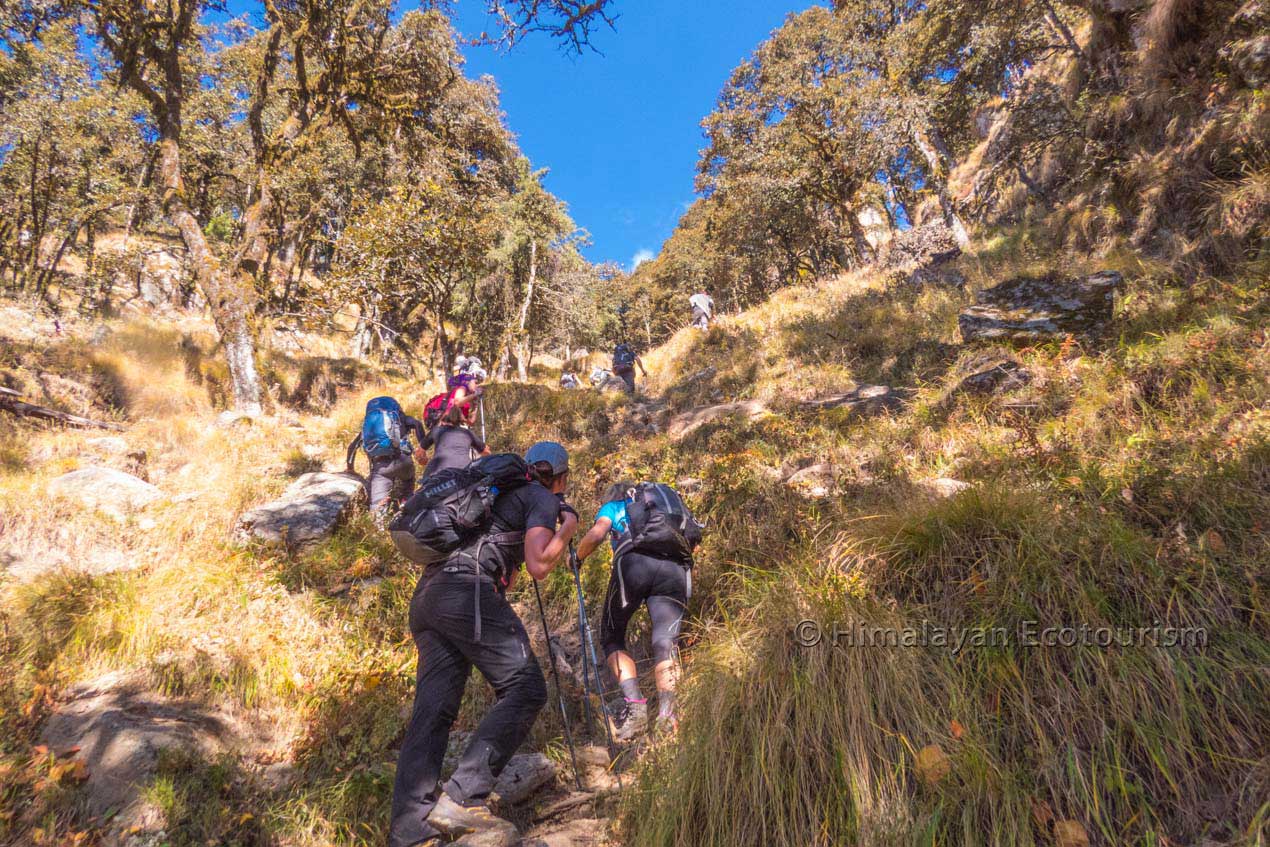 The climb to Kauni

Shortly after Rangthar you have a very steep climb to Kauni. Be ready :-) 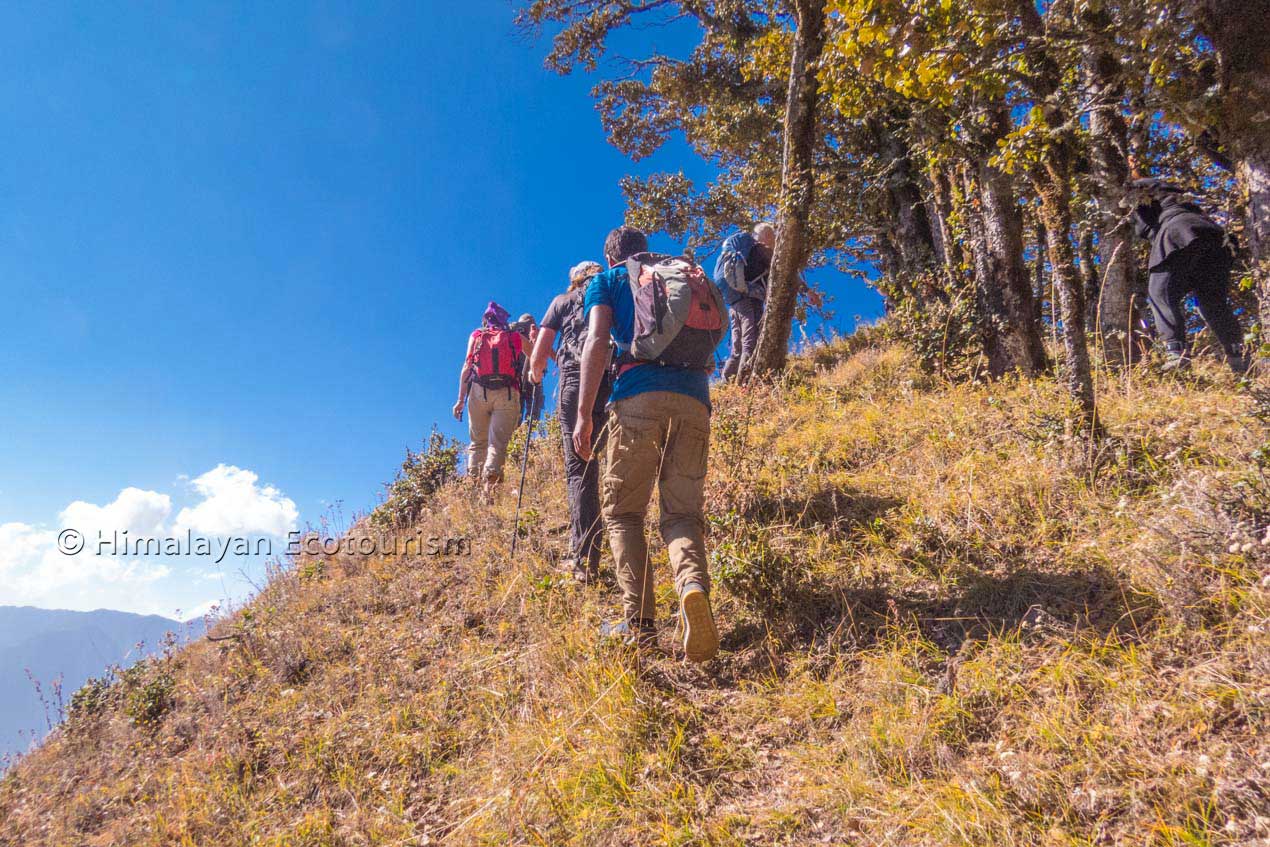 After the climb you are rewarded with a great view of the Tirthan valley. Have a break ! 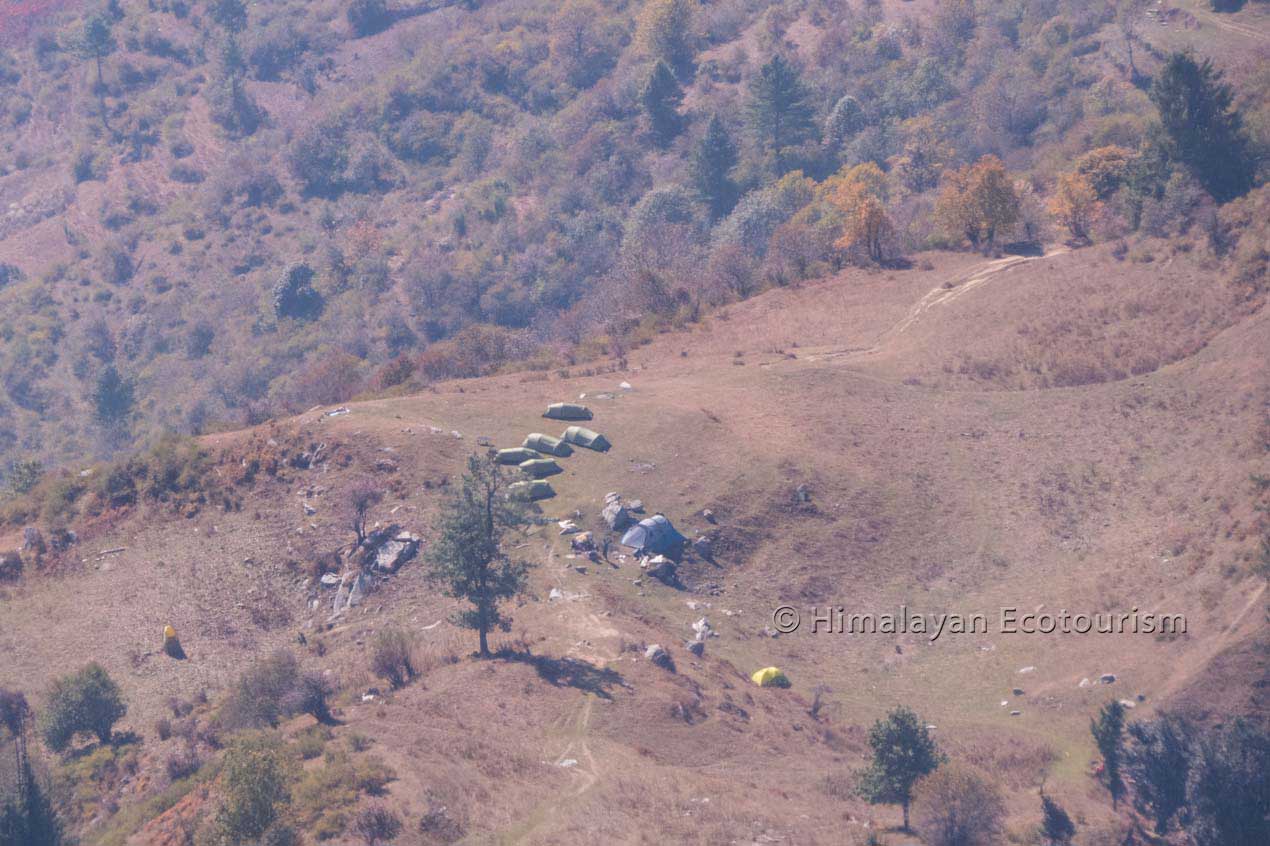 This is how your Rangthar camp looks like from Kauni. 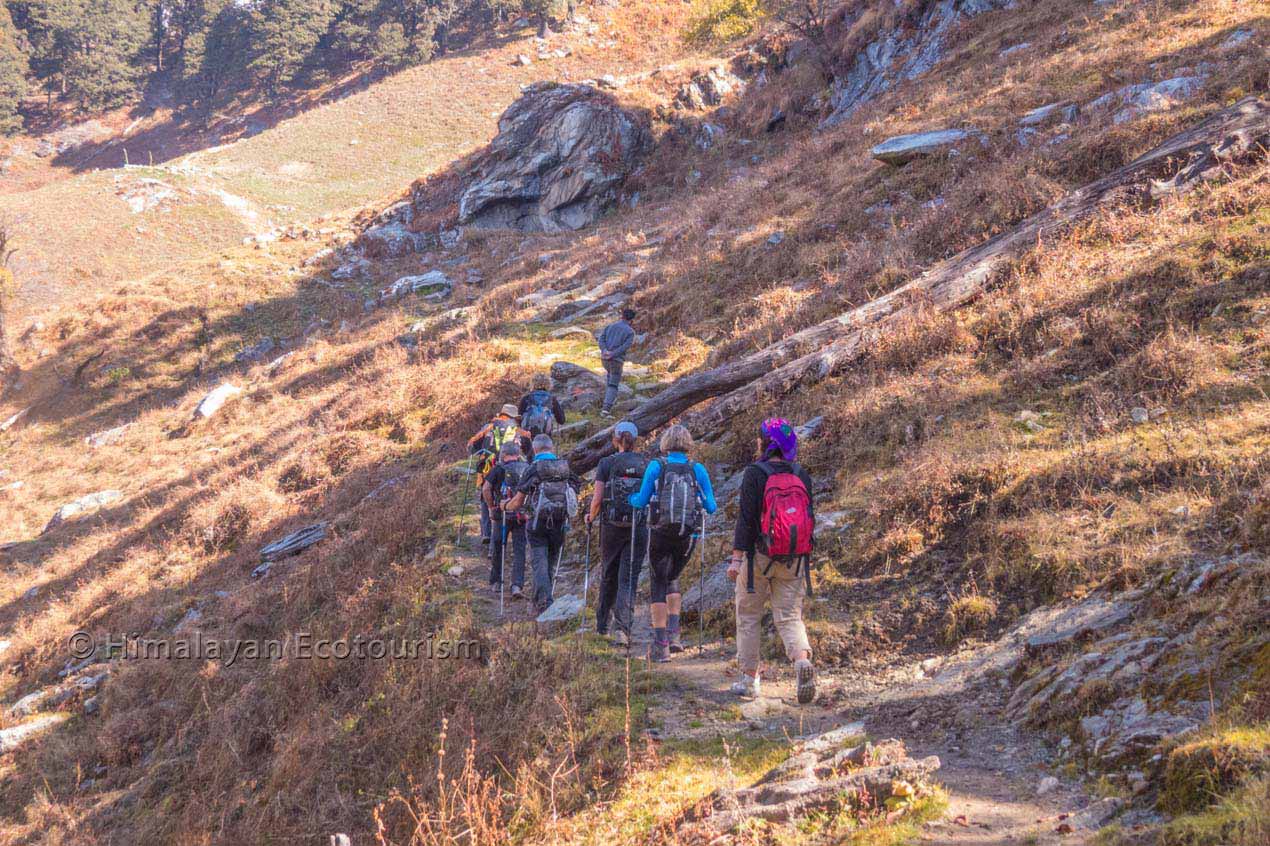 You will really enjoy your time after Kauni as you go through meadows and forests. 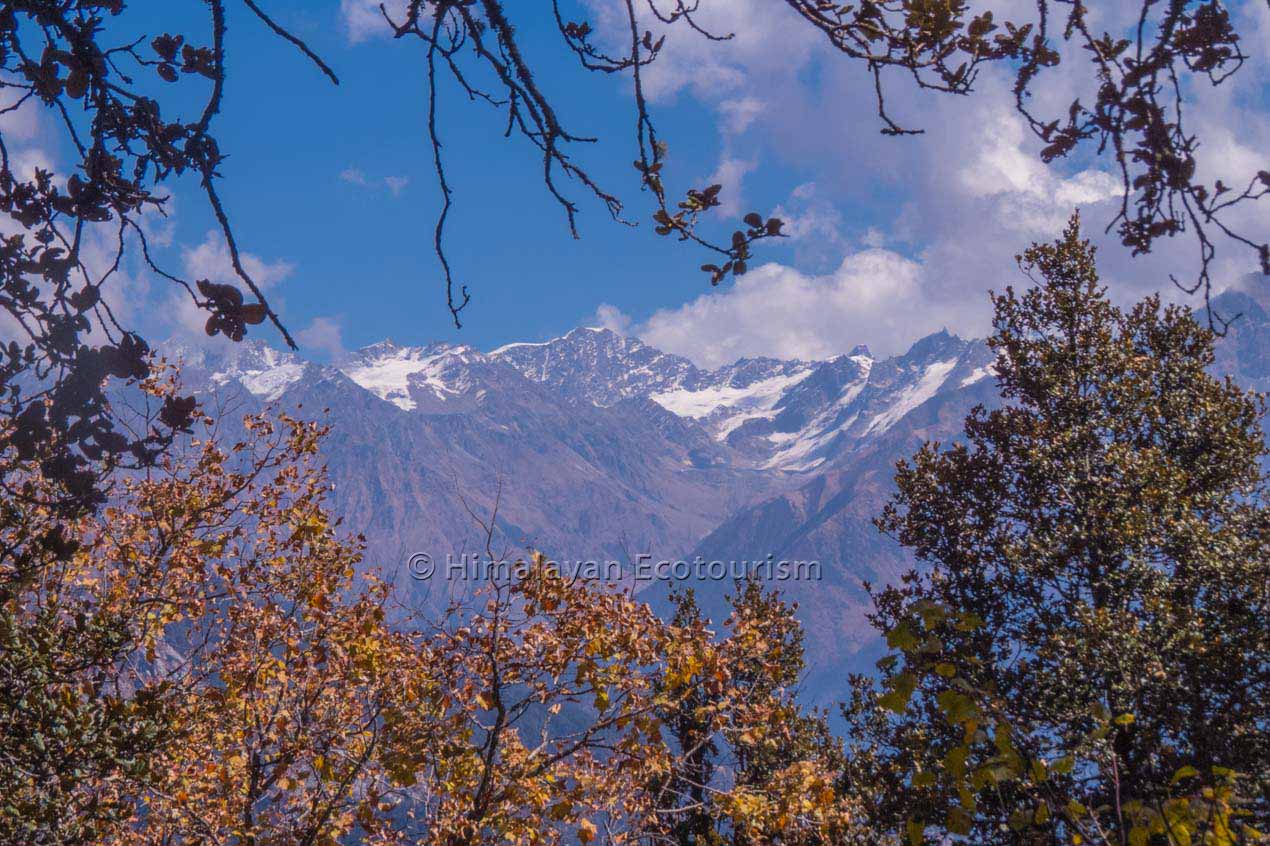 While hiking to Kundri the forest sporadically offers you great views in between 2 oaks. 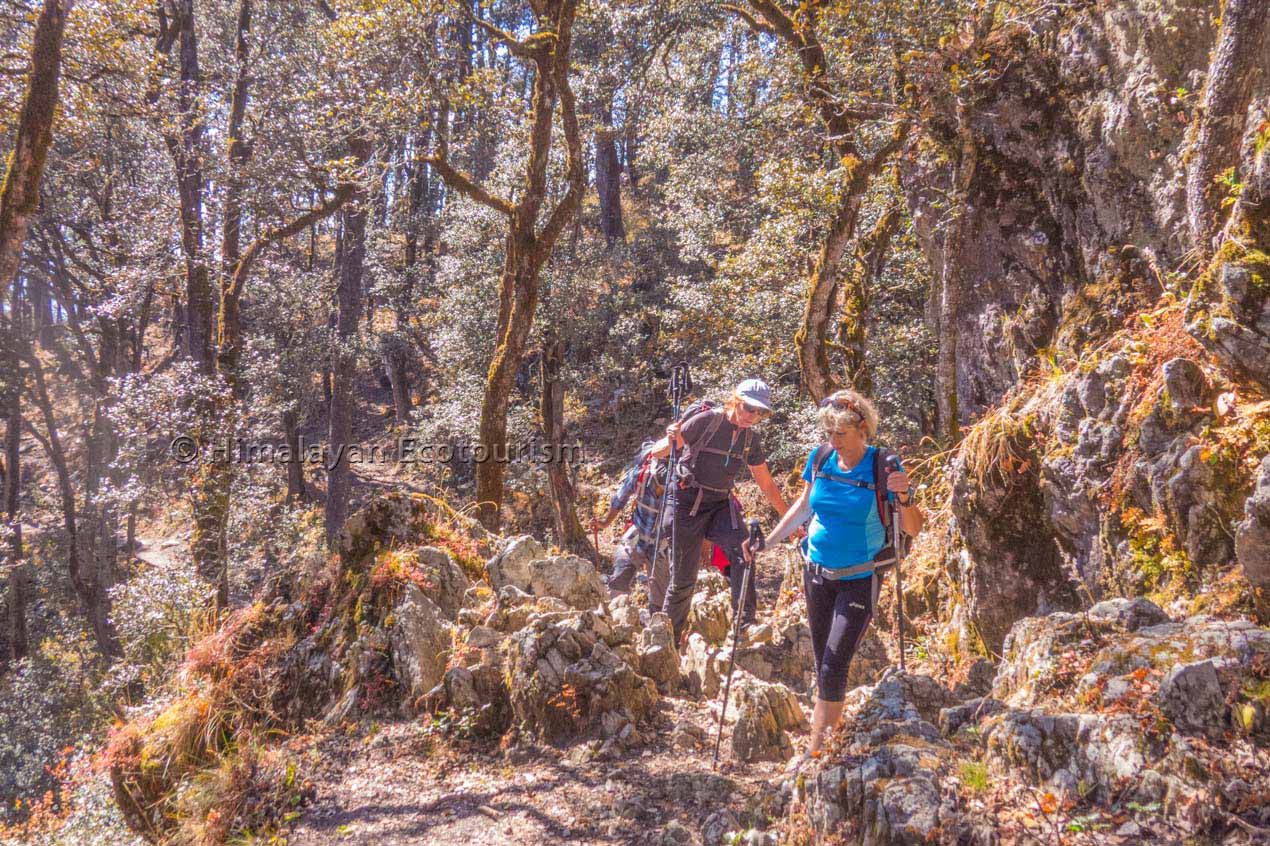 The ecosystem is dominated by the Golden Oaks which create a very special atmosphere. 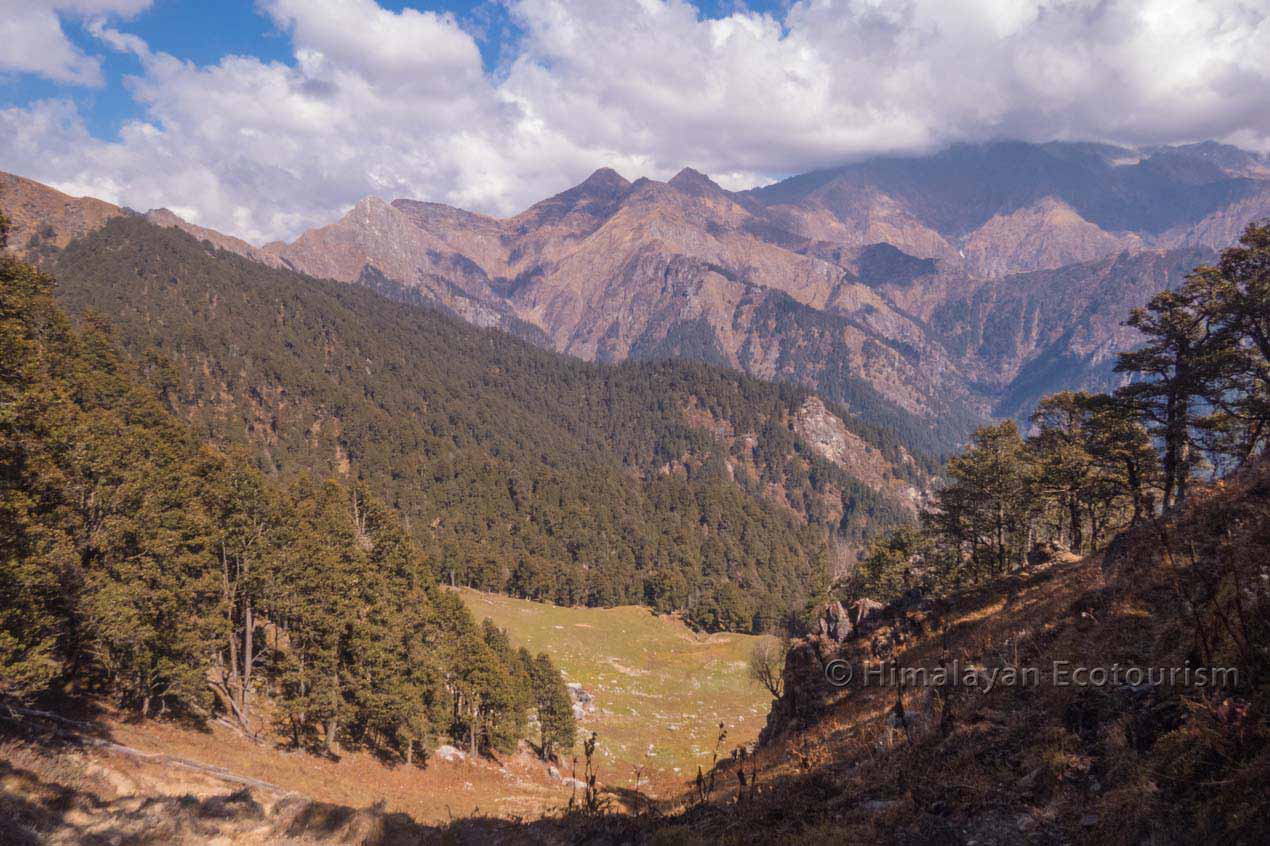 You reach Kundri from above and so you initially enjoy the view of the meadow. 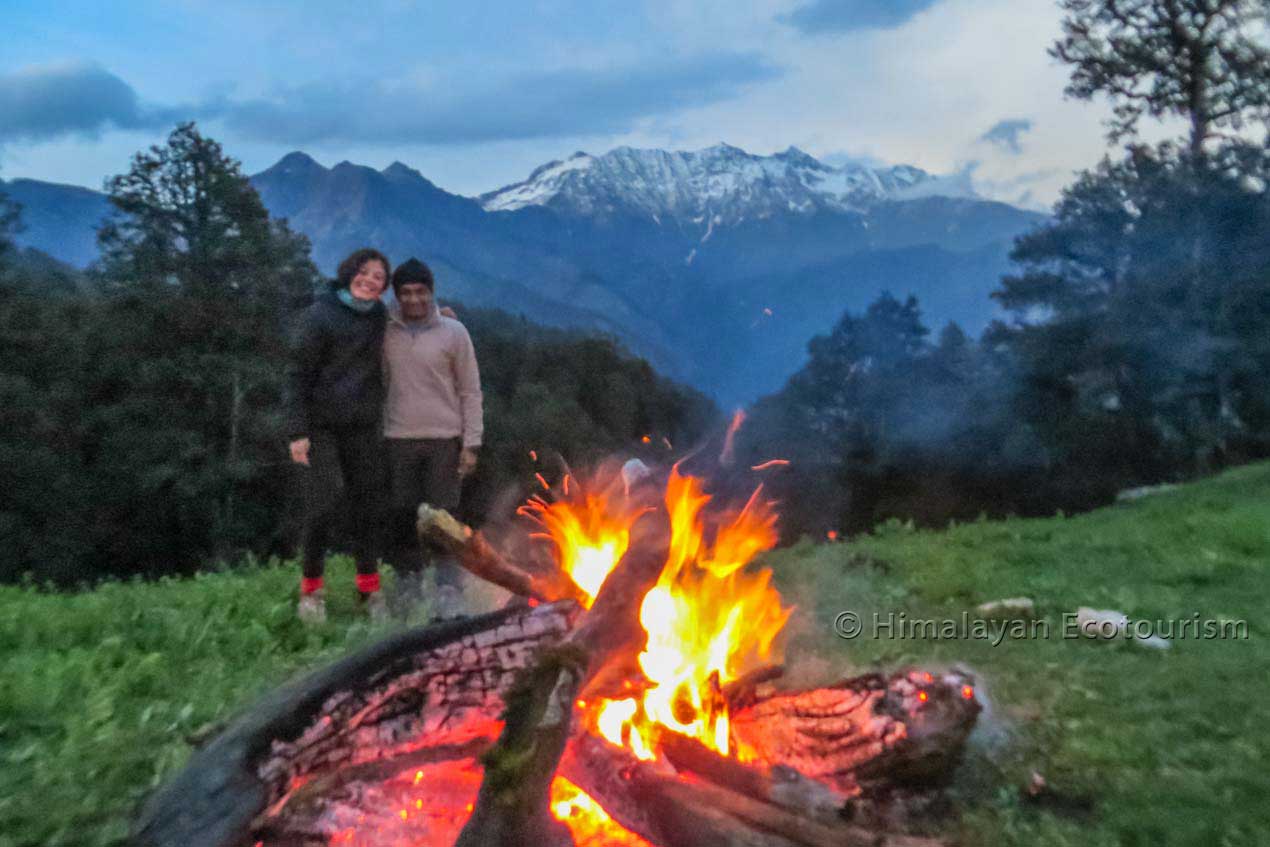 Enjoy the bonfire at Kundri which is at an elevation of 3400 m. 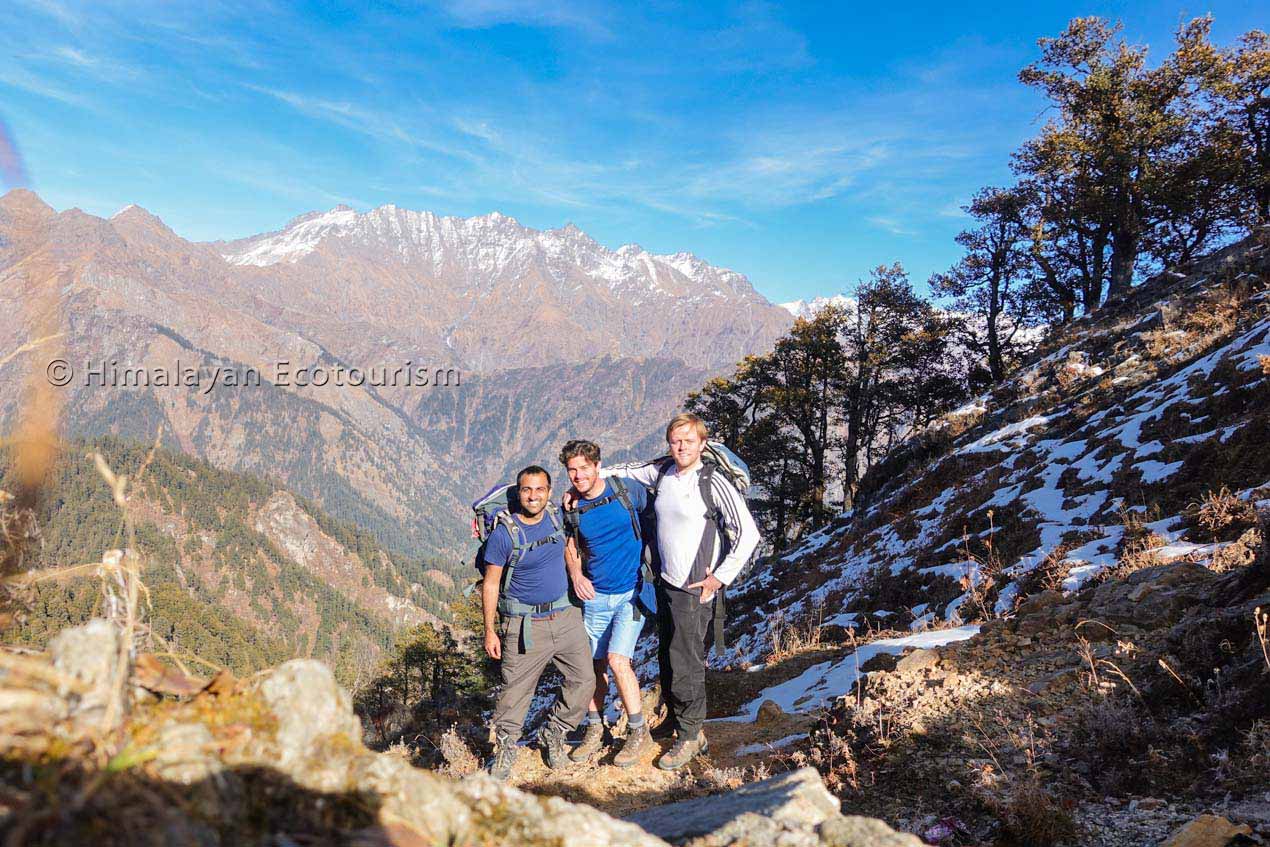 Climbing towards Marahni from Kundri. You may have some snow on the way. 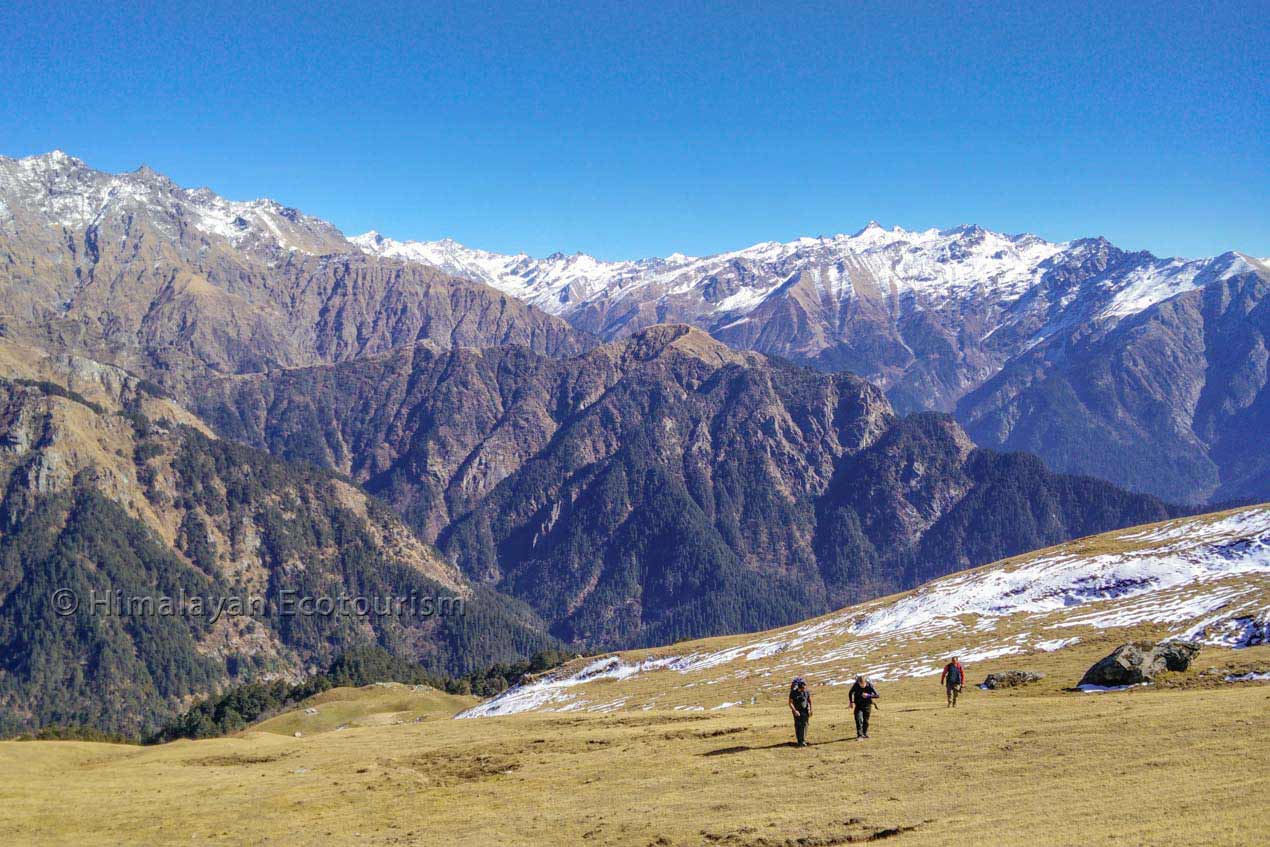 It is very exciting to approach Marahni as the view opens and the summit calls. 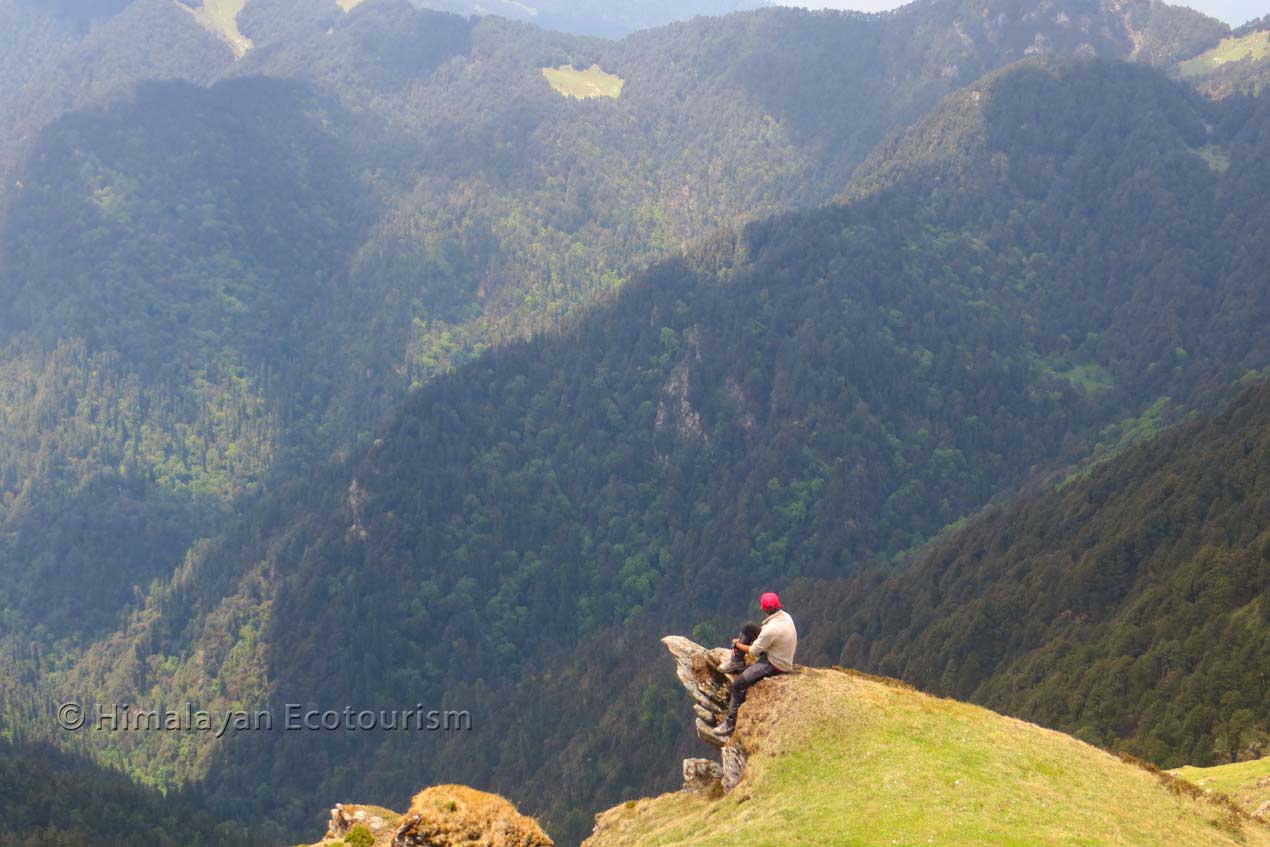 Looking towards the South you have a great feeling being above so much of forests. 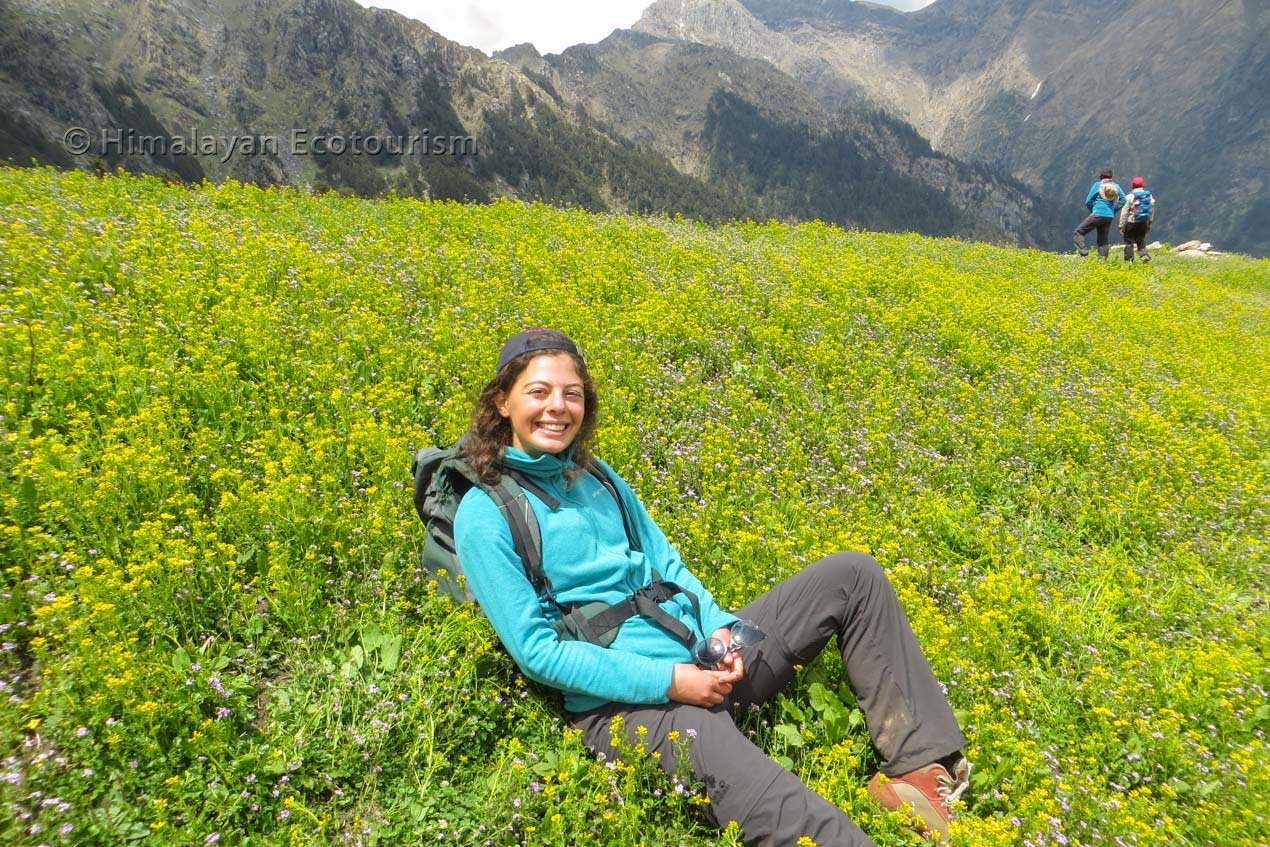 Pleasure of the wild

Marahni trek ? In less time, you enjoy a lot of the wilderness. 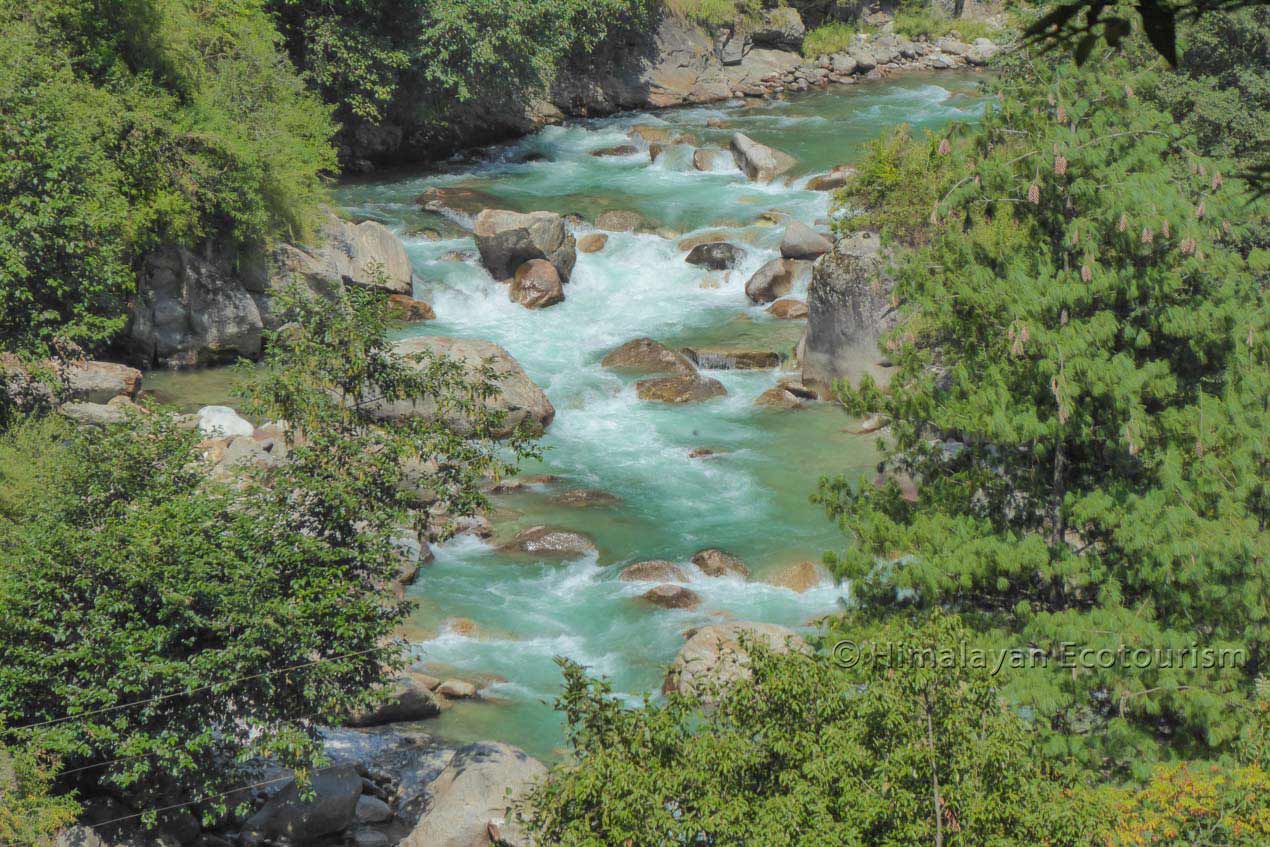 In case of a 5 day trek you can enjoy the riverside for the last camp and day. 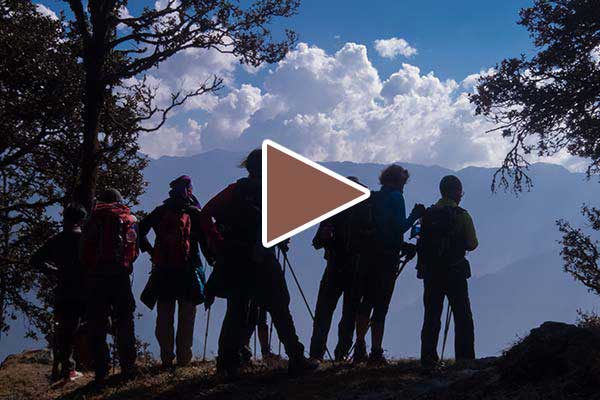 The trek to Marahni organized by Himalayan Ecotourism in GHNP 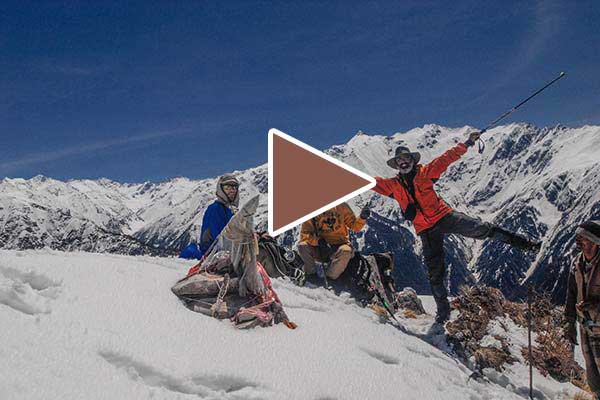 Trekking in the GHNP 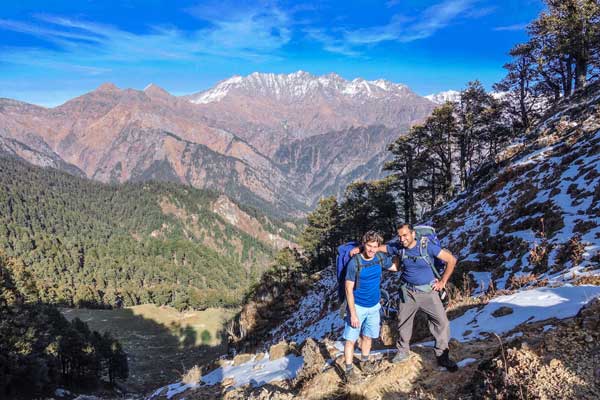 Connecting Tirthan and Sainj valley via the scenic Marahni top 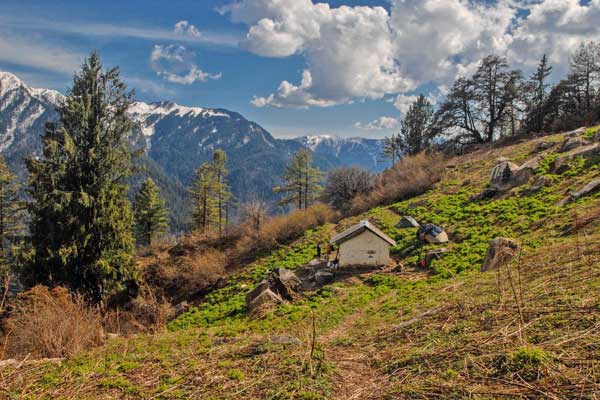 Reach a panoramic viewpoint in the Park

Join and follow us on Social media to get latest updates from the Great Himalayan National Park (GHNP) and the rest of the Western Himalayas.

Himalayan Ecotourism is the winner of the To Do award 2022 in the field of "Socially Responsible Tourism".
We are also the Overall Winner of the Indian Responsible Tourism Award 2019 and the Gold winner in the Best Adventure Operator category.
We have been declared winner of the Sustainable Tourism Award 2019 by Skal International and Biosphere.
Our cooperative-based model of social enterprise and our efforts to conserve the Himalayas are the main reasons for winning these awards.
Thank you to all our cooperative members, our customers, our friends and well-wishers !